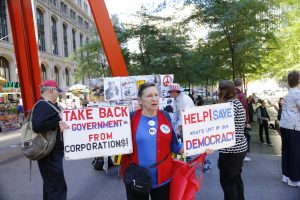 U.S. labor markets are shaping up, with recent record-breaking unemployment levels in May and June. But are those the best indicators of the overall health of our economy?

The May jobs report shows 3.8 percent unemployment, a level unseen since the 1960s. June’s report had a slight uptick in unemployment to 4 percent, according to the Bureau of Labor Statistics. And that 0.2 percent uptick isn’t due to the net number of unemployed workers, rather an increase in labor participation—meaning that more formerly discouraged workers are participating in the economy again.

These are all signs of a strong economy. So why doesn’t it feel strong? 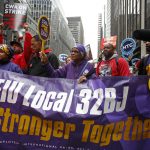 Labor unions give workers representation in the workplace. They benefit all U.S. workers, not just those with memberships. Over the years, they’ve negotiated better wages, better benefits, and better work hours for all Americans. Child labor and sweatshop conditions are a thing of the past because of union bargaining.

But union membership has been on steady decline over the past 30 years. To make matters worse, on June 27, a Supreme Court ruling jeopardized millions of dollars of union funding, which delivered a blow to already struggling public-sector unions.

Photo: Verizon workers gathered with members of other unions and labor leaders to strike in front of Verizon’s Wall Street headquarters. Attribution : a katz / Shutterstock

It’s because, when compared to other countries, and even to U.S. history, it’s not. An analysis of a nearly 300-page report by the Organization of Economic Cooperation and Development (OECD) done by The Washington Post shows a state of economic decay behind the recent jobs numbers.

“The United States [has] a higher level of income inequality and a larger share of low-income residents than almost any other advanced nation,” wrote the Post’s Andrew Van Dam. “Only Spain and Greece, whose economies have been ravaged by the euro-zone crisis, have more households earning less than half the nation’s median income—an indicator that unusually large numbers of people either are poor or close to being poor.”

And it’s only getting worse.

According to Inequality.org, an organization dedicated to tracking income inequality in the U.S. in conjunction with the Institute for Policy Studies, U.S. income inequality “has been growing markedly, by every major statistical measure, for some 30 years.”

Today, workers may be landing jobs, but they’re not gainfully employed. The last federal minimum wage hike was almost a decade ago. In July 2009, it was raised to $7.25 per hour, which is painfully low compared to other historic minimum wages.

The highest minimum wage in U.S. history was in 1968 when National Employment Law Protection (NELP) organized a campaign to hike wages to $1.60. That would be $11.80 per hour when adjusted for inflation.

The NELP was invigorated by strong labor unions. The 1960s saw record-high labor union participation. At its highest levels in the mid to late 60s, almost a third of workers were part of a union—yet another dying trend in today’s economy.

The latest Union Members Summary from the Bureau of Labor Statistics sheds light on how far union membership has fallen over the years. Overall union participation has plummeted to 10.7 percent, with private sector workers at a meager 6.5 percent.

Since the Great Recession, the U.S. economy is in a better place. But the underlying causes of that recession have grown. With inequality rising, union membership declining, and wages stagnating, the next bust may not be so forgiving.