What the GOP and Putin Have in Common 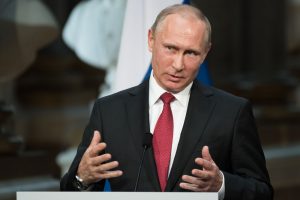 One would hope that there would be a marked contrast between the values that American politicians hold versus the values that Russian President Vladimir Putin holds. But that’s not the case.

As it turns out, the GOP and Putin have quite a bit in common—and that’s no coincidence. To the contrary, it’s by design.

According to Politico, Putin has been targeting the American right since at least 2013. Not only has he gone to great lengths to market himself and Russia as the final bastion of “traditional values,” but he’s also condemned the “genderless and infertile” liberal attitudes of the U.S. and other Western countries.

In 2013, under Putin’s leadership, the Russian government passed a law banning “homosexual propaganda.” It’s a dream come true for Republicans, who have tried to limit the rights of LGBT people under the guise of “religious freedom.”

Civics Lesson: How Do We Know Russia Interfered in the U.S. Election?

We know that Russia interfered in the 2016 U.S. election because our nation’s most trusted and revered institutions have investigated the matter and arrived at the same conclusion. The Senate Intelligence Committee, for example, recently endorsed a January 2017 Intelligence Community Assessment that found that Putin had ordered an influence campaign aimed at undermining then-candidate Hillary Clinton. The CIA, FBI, NSA, and Director of National Intelligence all agree that Russia attempted to sway the election in favor of Donald Trump.

James Kirchik, the Brookings Institution researcher who authored the Politico piece, believes that Putin is purposefully positioning himself to win the favor of American conservatives. His theory certainly has merit, given that in 2013, a Russian-linked think tank called the Center for Strategic Communications published a report entitled, “Putin: World Conservatism’s New Leader.”

This would explain why, as recently as last week, Republican senators expressed interest in befriending Moscow officials. It would also explain why many members of the GOP are completely apathetic about Russia’s interference in the 2016 U.S. election.

But not all conservatives are buying into Putin’s manipulation tactics. Florida Senator Marco Rubio, for example, was one of only a handful of Republican legislators to rebuke Russia for hacking into John Podesta’s email account and releasing thousands of classified emails from Hillary Clinton’s campaign.

“Today it is the Democrats. Tomorrow it could be us,” Rubio warned.