Is “Hostile Sexism” Playing Out in Politics?

Women can practice hostile sexism against other women, too. Photo by Pamela Au / Shutterstock.com

Considering how sexism affects women’s lives in areas such as business, the arts, religion, and even their home lives, it’s not surprising that it also finds its way into politics and leadership choices as well.

Just witness candidate Donald Trump following Hillary Clinton around the stage and lurking behind her in the second 2016 presidential debate. Everyone watching the debate—men and women alike—realized that he was using his physical size (he’s 6’3” tall, while Clinton is about 5’5”) in an attempt to intimidate her as she made her points in the debate. Not to mention the misogynistic messages Trump supporters wore on their shirts and wrote on signs (Warning: the link in this sentence has photos of obscene and misogynistic language).

Then there was the time when Senate Majority Leader Mitch McConnell formed a 13-person working group on health care, to come up with a bill to replace the Affordable Care Act. That committee contained zero women, although they were crafting policy on an issue that directly impacts women. The Senate has plenty of Republican women members to choose from, so McConnell could certainly have chosen, say, Susan Collins of Maine or Lisa Murkowski of Alaska. 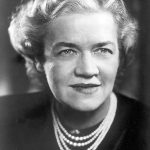 For many decades, Margaret Chase Smith served as a role model for women who wanted to enter politics. She was the first woman to win election to both the U.S. House and Senate, a stunning achievement given that her political career began in 1940 when her husband, Maine Representative Clyde Smith, became too ill to continue campaigning. In 1948, she ran for the Senate and won against Democrat Adrian Scolten by getting 71 percent of the vote.

The defining moment in Smith’s career came on June 1, 1950, when she took the Senate floor to protest Senator Joseph McCarthy’s witch-hunt against Communists. In her speech, she charged that McCarthy had debased the Senate “through the selfish political exploitation of fear, bigotry, ignorance, and intolerance… The American people are sick and tired of being afraid to speak their minds lest they be politically smeared as ‘Communists’ or ‘Fascists’ by their opponents. Freedom of speech is not what it used to be in America. It has been so abused by some that it is not exercised by others.” Smith’s “Declaration of Conscience,” as she called it, did not hurt her political career in the least. She served in the Senate until 1972, when she lost against Democrat William D. Hathaway.

These are just a couple of the most recent egregious examples of sexism in the Republican party. But it’s not just so-called radical feminists who are seeing sexism and calling it what it is. A recent article in Psychology Today cites a study that concluded, “American voters’ preference for Trump over Clinton [is] a function of sexism, political ideology, gender, and racist and xenophobic attitudes.”

The Psychology Today article also reveals that there are two forms of sexism: benevolent sexism and hostile sexism. Benevolent sexism is “a paternalistic view in which women are seen as weak beings who need to be cherished and taken care of, analogous to children.” This form disempowers women and pushes them aside in favor of “stronger, tougher men who are charged with protecting the weak.”

Hostile sexism, on the other hand, “views women as the enemy of men and views women as waging a battle to wrest control from men through sex, trapping men in relationships, and through feminist politics.” That hostile sexism was—and is—certainly in evidence not just in the 2016 campaign but in Republican leadership’s attitude toward women.

Finally, the Psychology Today article states that the dominance of men and implicit sexist attitudes have shaped human history and that we’re now at a point where we need to choose how to deal with sexism—both hostile and benevolent—in politics and other areas of life. In order to deal with our internalized sexism, we first need to admit that it exists, and that it affected the outcome of the 2016 election. Then, we need to root out the beliefs that lead to benevolent and hostile sexism, and remember that women, too, can be sexist (against women) due to their own internalized sexism.