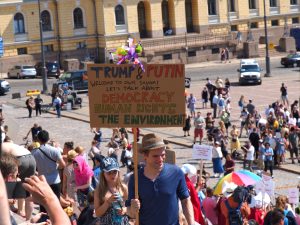 Protestors gather outside the building where Presidents Trump and Putin are meeting. Photo by watermelontart / Shutterstock.com

When President Trump met on July 16, 2018, for a summit with Russian President Vladimir Putin, the two leaders spent the first two hours of that summit in a one-on-one meeting. After it ended, Presidents Trump and Putin appeared together in a joint press conference in which President Trump was not the least bit hesitant to share his feelings about allegations of Russian interference in the 2016 U.S. election.

“[U.S. intelligence officials] said they think it’s Russia. I have President Putin—he just said it’s not Russia,” President Trump said. “I have great confidence in my intelligence people, but I will tell you that President Putin was extremely strong and powerful in his denial today.”

Civics Lesson: Who Is Vladimir Putin? 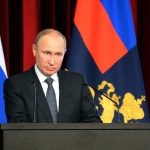 Russian President Vladimir Putin was born on October 7, 1952, in Leningrad, Russia (now known by its pre-Communist name of St. Petersburg). He studied law at Leningrad State University, earning his degree in 1975, and served as a KGB foreign intelligence officer for 16 years before resigning in 1991 to enter politics. He rose quickly through the ranks of President Boris Yeltsin’s administration and even became Acting President on Dec. 31, 1999, when Yeltsin resigned. He served as president from 2000 to 2008, when constitutionally mandated term limits forced him to leave office. In September 2011, he announced that he would seek a third term as president. He won the 2012 election and gained re-election in 2018 for a six-year term ending in 2024.

Under Putin’s leadership, Russia has experienced a backslide from democracy toward authoritarianism. Western analysts no longer consider Russia to be a democracy, and human rights organizations have accused him of persecuting political critics and activists, as well as ordering those individuals’ torture and assassination. Unsurprisingly, Putin rejects these accusations. (Photo by Free Wind 2014 / Shutterstock.com)

Well, that settles it, then: the Russian government couldn’t have interfered in the 2016 election because Vladimir Putin said they didn’t. Seems legit.

The president’s distressing lack of skepticism about Russia’s protests of its innocence in election meddling (in fact, there’s clear evidence that Putin had ordered an influence campaign to undermine Americans’ faith in the democratic process and that Russia had developed “a clear preference for” Trump) is not shared by many Americans. In fact, politicians, pundits, and even TV anchors across the political spectrum are calling President Trump out for his behavior and statements at the joint news conference.

Republican Senator John McCain of Arizona called the Helsinki Summit press conference “one of the most disgraceful performances by an American president in memory.” Just in case his meaning wasn’t totally clear, McCain continued:

“President Trump proved not only unable but unwilling to stand up to Putin. He and Putin seemed to be speaking from the same script as the president made a conscious choice to defend a tyrant against the fair question of a free press, and to grant Putin an uncontested platform to spew propaganda and lies to the world.”

Donald Trump’s press conference performance in Helsinki rises to & exceeds the threshold of “high crimes & misdemeanors.” It was nothing short of treasonous. Not only were Trump’s comments imbecilic, he is wholly in the pocket of Putin. Republican Patriots: Where are you???

Retiring Arizona Senator Jeff Flake said, “I never thought I would see the day when our American President would stand on the state with the Russian President and place blame on the United States for Russian aggression. This is shameful.”

Republican Senator Bob Corker, who chairs the Senate Foreign Relations Committee, said he was quite sure that the Helsinki summit press conference was not “a good moment for our country.”

That’s the understatement of the century.

Of course, all of these individuals have been known to be vocal critics of President Trump, so it’s not surprising that they’d have some stinging words to say about the Helsinki summit. But even the president’s biggest cheerleaders aren’t impressed with his words.

House Speaker Paul Ryan said in a statement, “The president must appreciate that Russia is not our ally. There is no question that Russia interfered in our election and continues attempts to undermine democracy here and around the world.”

Fox News anchors and reporters weren’t impressed, either. Anchor and Fox & Friends Weekend host Abby Huntsman tweeted, “No negotiation is worth throwing your own people and country under the bus.” Fox Business reporter Trish Regan called the president’s appearance “unpatriotic.”

You got to ask yourself why Trump would so abjectly kiss Putin’s ass unless of course he thinks he owes Putin something or Putin has something on Trump https://t.co/JnYDA6sdeJ

It is—and should be—very hard for President Trump to catch a break given that he appears now to show more allegiance to Russia and Vladimir Putin than to the United States — so much so that even Fox News starts telling it like it is.