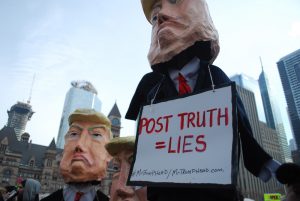 We’ve written before about President Trump’s tendency to manifest chaos and drama through his public appearances and tweets as a tactic to control what the media is reporting.

It’s hard to know just what the truth is when we’re being blasted constantly by a person whose goals are still not entirely clear. Does the president really want to bring about an authoritarian state led by him and a small junta of family members and loyal military personnel, or is he simply an idiot full of sound and fury, symbolizing nothing? (Apologies to William Faulkner).

Author and political commentator Robert Reich recently took to Facebook with a video explaining his beliefs about why President Trump is doing what he’s doing. Essentially, Reich said, the president uses five tactics to “create a fog of confusion and bewilderment so we don’t pay attention to the damage he’s doing.” 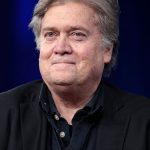 Former White House Chief Strategist Steve Bannon has been accused of running a “chaos strategy” that President Trump continues to use as a part of his fog machine. In politics, the chaos strategy involves using conflict to create a constant state of destabilized perception, in order to manage and control.

The first of these, Reich says, is distraction. By dominating the news with his more outrageous actions—who he’s fired, who he’s insulted, what kind of crazy talk was in his most recent tweet, and so on—he’s causing us to be, in Reich’s words, “so preoccupied with all this that we lose sight of the big picture: how he’s undermining our democracy… stoking hatefulness, [and] undercutting America’s standing in the world.”

The second tactic President Trump uses is to divide and conquer. We are all very familiar with the way he pits groups against one another, riles up his base, and vilifies opponents. We’ve also seen many times that the president loves to use race-baiting: the way he “weaponized patriotism” when NFL players (most of whom are black) who “took a knee” during the National Anthem to protest racial injustice is the most obvious example of his divide and conquer tactics.

“This way, public dialogue becomes so angry, bitter, and vitriolic that we end up shouting at each other instead of seeing the damage Trump is actually doing,” Reich comments.

The third component of the presidential fog machine is lying and distortion. The president’s unrelenting blizzard of “alternative facts” has been well documented in several sources. The Washington Post reported that the president has made 3,001 false or misleading claims from the time he took office until May 1, 2018, the date the Post article was published. “His goal is for us to lose confidence in the truth so we can’t be sure what he’s doing,” Reich says.

Another thing the president does to keep the fog machine going is to conjure up conspiracies. One example involves his ongoing campaign to discredit the Mueller investigation by paranoid assertions about a “deep state” whose goal is get him out of office, one way or another. He calls the investigation about a conspiracy with Russia a “witch hunt” to undermine him. However, “he never identifies who or what this ‘deep state’ actually is,” Reich says. “The mere assertion of a conspiracy is enough to generate suspicion, erode trust in the political system and in the media, and sow doubts about anyone who criticizes him or any findings that could show he acted illegally.”

Fifth and finally, the president accuses the accusers. He alleges that others are doing what he’s doing—a sort of “are so/am not” battle with his detractors. For example, when the media catches him in a lie or says something he doesn’t like, he accuses them of reporting “fake news.” After running a campaign centered on “draining the swamp,” he’s allowed corporate lobbyists and his friends to run agencies and then accuses his critics of being part of the swamp.

Reich concludes by warning viewers that these tactics are all designed to hide the really awful things the president is doing in order to keep people from mobilizing against him.

“Be aware: don’t allow this fog to cloud the truth,” Reich advises.