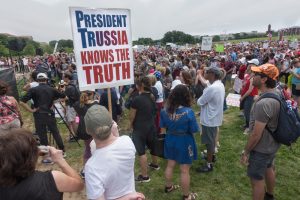 A protestor at the 2017 March for Truth. Photo by bakdc / Shutterstock.com

Much of America is justifiably panicked at this point about the role Russia appears to have played in the 2016 election of Donald Trump to the presidency. In the last year or two, it’s become apparent not only that Russia interfered in our democratic process, but also that President Trump himself may be compromised. So naturally, when the White House invites Russian president Vladimir Putin to the United States for a meeting with our president, you’d think the intelligence community would be informed about that ahead of time.

Not so, according to the Washington Post. In fact, when Director of National Intelligence Dan Coats was notified this week that the Russian president had been invited to Washington to meet with the president, he was taken by surprise, stammering, “Say that again?” followed by “Did I hear you?”

President Trump’s continued desire to create a tighter alliance with Putin has drawn ire from just about everyone in Washington, left and right alike. Senate Minority Leader Chuck Schumer, for one, is outraged that the president hasn’t been willing to share the details of their conversation. 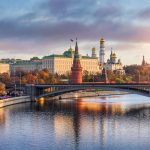 There’s plenty of consternation about the possibility that for the last two years, President Trump has been advocating for policies that advance Russian president Vladimir Putin’s goals rather than those of his own country. But if you dig a little deeper, the questions only become more alarming—for instance, what if the president has been a Russian asset for 30 years?

Jonathan Chait at New York magazine laid out that case, tracing President Trump’s pro-Russia political views all the way back to a 1987 visit to Moscow in which the businessman first met with Soviet ambassadors. He returned from this visit “fired up with political ambition,” and his bold political stances, such as the declaration that “America should stop paying to defend countries that can afford to defend themselves,” sound eerily similar to his anti-NATO rhetoric of today.

If President Trump’s political ties with Russia really date back that far, it’s hard to imagine a couple of sad tweets from Jeff Flake in 2018 making much of a difference.

“Do we know if President Trump made commitments about the security of Israel or Syria or North Korea or any of the other issues the president said he discussed with Putin?” Schumer asked. “It is utterly amazing, utterly amazing, that no one knows what was said.”

Coats, for his part, said he would have advised against meeting with Putin if he’d been asked, noting that it’s possible Putin was secretly recording him in order to gain more leverage in foreign policy.

“That risk is always there,” Coats said.

Through many of President Trump’s questionable decisions, Republican lawmakers have been willing to protect him, but when it comes to Putin, the president is alone on an island politically. Senators John McCain, Jeff Flake, and Lindsey Graham are just three of the many Republican lawmakers who have chastised the president for his behavior at the recent Helsinki summit. The Senate also voted 98-0 to tell President Trump he should deny Putin’s request to interview American citizens being targeted by Russian investigators.

And then there’s the intelligence community. The Post reported that tensions have been running high between President Trump and Dan Coats especially, and it’s not hard to see why: the president has refused to listen to his own national intelligence director on the topic of election interference in 2016. He has hand-waved away allegations of any Russian wrongdoing, saying simply, “They think it’s Russia; I have President Putin, he just said it’s not Russia.”

This tactic of drawing a false equivalency between an American intelligence leader and a political figure widely known to be a murdering dictator is certainly not doing President Trump’s reputation any favors. More surprising still is that even the Director of National Intelligence had no idea of the upcoming summit until a reporter told him about it.

Is this how a president operates? Should it be? Let us know in the comments how you feel.