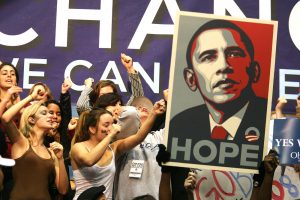 The crowd at an Obama campaign rally in 2008.
Photo by Krista Kennell / Shutterstock

Although many Americans have become disillusioned with our two-party system—and for good reason—it’s important to take a look back at history and see what has been accomplished by each of these parties. In this, the first of a two-part series, we’re taking a look at what Democrats have accomplished to make life better in America. Later today, we’ll have a similar post about Republican accomplishments that have improved the lives of Americans.

The points we’re trying to make with this and our later post are that both parties have contributed to really positive developments for Americans, and that both parties’ places on the liberal-conservative spectrum have changed over the years. The Democratic Party of the post-Civil War South, for example, bears little resemblance to modern Democrats. The same is true of the Republican “party of Lincoln,” which would look completely alien to today’s Republicans.

American political history is replete with change and evolution. It has to be, because as our nation has grown in size and population, the structures that govern it need to change as well. That said, the major accomplishments by Democrats began at the turn of the 20th century, as the party began to align itself with more progressive values. 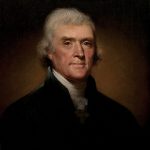 The Democratic Party traces its origins back to 1792, when supporters of Thomas Jefferson and James Madison—who favored decentralized, limited government—formed a party, the Democratic-Republicans. The Democratic-Republicans were opponents of the Federalists (including George Washington and John Adams), who favored a strong central government and a national banking system. In 1828, Senator Martin van Buren built a new organization, the Democratic Party, to back Andrew Jackson in the highly controversial 1824 election.

In the mid-1800s, the Democratic Party came to dominate the South because, in what is not exactly a shining moment in the party’s history, Southern Democrats strongly favored slavery. But as the 19th century ended, Republicans had become known as the party of big business, while Democrats were identified with rural farming and conservative values. It was 1896 Democratic presidential nominee William Jennings Bryan, whose advocacy for bigger government to ensure social justice, cost him the election but shaped the party’s platform going forward.

The Great Depression established Democrats as the progressive party: Franklin D. Roosevelt’s New Deal brought the nation out of financial chaos and began an era of Democratic dominance that would last for almost 60 years. Although the Democratic Party’s values have shifted well to the right since then, it is still known as the party that values social and economic justice and government intervention to ensure equal opportunity for all.

Photo: Thomas Jefferson, one of the founders of the Democratic-Republican party (public domain)

Democrat Woodrow Wilson, who served as president from 1912 to 1920, is widely regarded by historians as one of the nation’s greatest presidents because of his advocacy for democracy and world peace. Among Wilson’s accomplishments are the creation of the Labor Department in the Cabinet and the workers’ compensation program. In the finance and banking arena, Wilson signed the Clayton Anti-Trust Act and the Farm Loan Bank Act into law. He is also credited with the establishment of the Federal Reserve Bank. He also signed into law the 19th Amendment, granting women the right to vote.

Franklin D. Roosevelt, arguably the most famous of the Democratic presidents, is renowned for the New Deal, which lifted the U.S. out of a six-year depression by creating jobs through the Civilian Conservation Corps and other employment programs. He signed minimum wage and unemployment compensation legislation into law and is responsible for the National Labor Relations Act. He signed the Social Security Act into law, allowing some level of income security for elderly Americans, and signed the Securities Exchange Act, which requires companies to file detailed annual reports with the Securities and Exchange Commission in order to have their securities publicly traded on the stock exchanges. Roosevelt also established the Farmers Home Administration and the Rural Electrification Administration. He was one of the principal parties in the establishment of the United Nations after World War II. Finally, Roosevelt signed the GI Bill of Rights, which established low-interest home loan programs and college benefits for veterans.

Democrat Harry Truman signed the Federal Loan Housing Act, established the Fulbright-Hughes Scholarship program, and signed the Rural Telephone Act, ensuring that Americans all across the country had access to the telephone. Truman was one of the signatories of the Marshall Plan, an aid package to European nations that had been devastated by World War II, and one of the national leaders who established NATO, a mutual protection pact between nations who were threatened by the expansion of Soviet Communism.

John F. Kennedy laid the groundwork for many accomplishments by Democratic administration. He also established the Peace Corps, whose mission was to combat communism by bringing young adults from America to developing nations to engage in tasks ranging from teaching English to building homes and wells. Kennedy’s VISTA (Volunteers In Service to America) program was “the domestic Peace Corps,” working toward educational equality and resource availability for underserved urban and rural communities.

Lyndon B. Johnson, who inherited the presidential seat when Kennedy was assassinated and then won election in his own right, is responsible for signing numerous pieces of landmark legislation including the Civil Rights Act, outlawing discrimination on the basis of race, color, religion, sex, or national origin; and the Voting Rights Act, making it illegal to discriminate against people of color in the voting process. He also established the Head Start program and the Medicare and Medicaid programs to ensure that the elderly and the poor could receive adequate medical care.

Democrat Jimmy Carter established the Federal Emergency Management Agency. He created the Department of Education and the Department of Energy and negotiated the Camp David Accords, which led to the signing of a peace treaty between Egypt and Israel. Carter was also responsible for renegotiating the Panama Canal treaty in ways that were favorable for America.

Bill Clinton was responsible for signing several laws we take for granted today—the Family and Medical Leave Act and the Earned Income Tax Credit. Clinton also established the National Voter Registration Act (also known as the “Motor Voter” act), which requires state governments to offer voter registration to people who apply for or renew their driver’s license or apply for public assistance.

Democrat Barack Obama is best known for the Affordable Care Act which, although it didn’t do everything he hoped healthcare reform would do, did require insurance companies to cover people with pre-existing conditions and established “exchanges” where individuals could purchase high-quality health insurance at an affordable price. He also signed the Lily Ledbetter Fair Pay Act of 2009, the Caregivers and Veterans Omnibus Health Services Act, and a nuclear arms reduction pact with Russia.

No party is as pure as people would like to believe it is. The Democrats definitely have a checkered history, but overall, Democratic presidents have led many reform efforts and created many programs that we still hold sacred even today.