Independents Top Party Affiliation Poll; Where Are They in Congress? 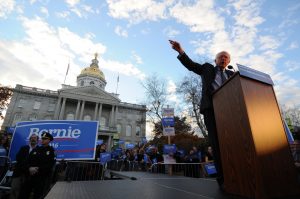 In fact, it’s not even close. According to Gallup’s July poll, 41% percent of American voters identify as independent, 30% as Democrat and 26% as Republican.

Every month (sometimes more during presidential election seasons) since 2004, Gallup has asked Americans, “In politics, as of today, do you consider yourself a Republican, a Democrat or an independent?”

Civics Lesson: A Primer on Closed and Open Primary Elections

The majority of U.S. states force voters to choose from candidates of the same registered party during both congressional and presidential primary elections.

For independent and non-partisan voters across the majority of the country, that means they must wait until the general elections to vote for major candidates who have been filtered through either Democratic and Republican primaries. Usually third-party candidates do not do well running for office without the support of the Republican or Democratic parties.

In other words, since December 27, 2012, American voters have consistently identified as independent over Republican and Democrat—sometimes by margins as high as 21 percentage points.

So how do those numbers hold up in Congress? Not well.

In the 100-seat Senate, 51% of members are Republican, 47% are Democrat and 2% are independent. The two independent senators are Bernie Sanders of Vermont and Angus King of Maine.

The House of Representatives is even more skewed. Republicans control 55.4% of the 435 seats. Democrats control 44.6%. That leaves—surprise—zero independents in the House.

So how do Republicans control 51% of the Senate, 55.4% of the House and have a sitting president when only 26% of American voters identify as Republican?

Data from the U.S. Census Bureau shows that Americans who are white, 65 years or older and male all vote in higher numbers.

Party identification trends collected by the Pew Research Center since 1992 also corroborate that the Republican party has more older white men than other parties.

There are several key factors that keep voters from turning out on election day, including various state laws on voter identification, the lack of election holidays, congressional districting and long lines.

Closed primaries may also be a major contributing factor for independent voter participation as the majority of states require voters to declare party affiliation before congressional and presidential primary elections.

Regardless, Republicans continue winning seats because they show up on election days.