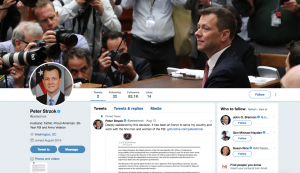 If you’re a progressive and you’re on social media, you’ve probably seen this tweet, supposedly by fired FBI agent Peter Strzok, going around: “I have been fired for expressing my personal opinion in private texts about a dictator that history will soon deem not only a Russian asset but an unhinged madman threatening the sovereignty of the United States of America.”

The trouble is, it wasn’t Peter Strzok who wrote it. Anyone who looked even a little bit carefully would have seen that the user name on the Twitter account that shared the post was @NotPeterStrzok, not Peter Strzok’s verified Twitter account, @petestrzok.

Although we’ve talked before about conservative echo chambers on social media and how they can be used to spread false news or other divisive rhetoric, liberals are not immune to “confirmation bias,” either—and unfortunately, that includes us. We shared this fake tweet on our Facebook page last week, and it was quickly brought to our attention by followers that this tweet was shared by a parody account rather than Strzok’s genuine, verified Twitter account. Thanks to the Civics Nation community for holding us accountable! (We removed the Facebook post as soon as we realized what we’d done.)

Civics Lesson: Who Is Peter Strzok?

Peter Strzok worked with the Federal Bureau of Investigation as a counterintelligence officer for 22 years. He was the Chief of the Counterespionage Section and led the FBI’s investigation into Hillary Clinton’s use of a personal email server. He was promoted to Deputy Assistant Director of the Counterintelligence Division, the second highest position in the agency, and led the investigation into Russian interference in the 2016 election.

Strzok was born near Sault Ste. Marie, Michigan, in 1970. His father was a longtime member of the Army Corps of Engineers. Strzok received a bachelor’s degree from Georgetown University in 1991, after which he served as an officer in the U.S. Army before leaving to join the FBI in 1996 as an intelligence research specialist. He received his master’s degree from Georgetown in 2013.

It turns out that the mastermind behind the @NotPeterStrzok account is a 21-year-old Pakistani who works as a “content and academic writer” and says he manages social media accounts for some Asian celebrities.

The fake Strzok account is not the first parody account this individual (who didn’t give his name to the Post for fear of being harassed) created. He’s created a bogus Twitter for a Bollywood actress that was quoted by Pakistani media, and he also made a fake Twitter account to impersonate former acting Attorney General Sally Yates. Most of his previous fake accounts have been suspended by Twitter—and, as of August 17, so has the @NotPeterStrzok account.

How does this successful celebrity impersonator go about doing his magic? First, he says, he’ll check Twitter’s trending list for any famous people. “I check if the person, who is trending, is already on twitter or not, if he/she isn’t then I set up a new account with good bio & username to make it look authentic,” he wrote to the Post in a Twitter direct message. “Then I post [a] few tweets.”

After the individual finds a person to target with a parody account, he then finds people who are already trending on Twitter and tweets about the individual he’s trying to impersonate. Once that’s done, he “makes them aware of his account by following them.” If the person being followed believes the account is legitimate, they might start tweeting it, too.

He was able to make the @NotPeterStrzok account look legitimate by taking an account that’s been around for a couple of years and renaming it.

With this information, how can you be sure you’re sharing tweets or other social posts from legitimate sources? Here are a few tips:

What it all comes down to is that people—including us—need to take a breath before retweeting or re-sharing a post that reflects our attitudes. We promise to do better in the future, and we hope you will, too.