The Press Bands Together to Protest—and Protect 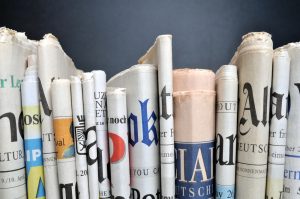 By now, we’re all familiar with President Trump’s constant refrain of “FAKE NEWS” and cries that the press is out to get him. “THE FAKE NEWS MEDIA IS THE OPPOSITION PARTY,” the president wrote in one tweet. “It is very bad for our Great Country……BUT WE ARE WINNING!”

Now it seems that the news media has had just about enough of President Trump’s anti-press rhetoric: recently, they decided to come together and speak up about it.

It all started with Marjorie Pritchard, deputy managing editor of the editorial page of the Boston Globe. She led the effort with more than 350 newspapers across the country to coordinate publication of editorials supporting freedom of the press and condemning the president’s constant drumbeat of messages denouncing the news media.

Civics Lesson: Why Is Freedom of the Press So Important? 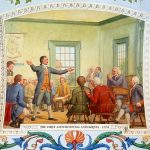 The Founding Fathers of the United States cared a great deal about freedom of the press, seeing it as a vital part of a democracy. In fact, in the Appeal to the Inhabitants of Quebec written by the First Continental Congress in 1774, reads, “The last right we shall mention regards the freedom of the press. The importance of this consists, beside the advancement of truth, science, morality, and arts in general, in its diffusion of liberal sentiments on the administration of Government, its ready communication of thoughts between subjects, and its consequential promotion of union among them, whereby oppressive officers are shamed or intimidated into more honorable and just modes of conducting affairs.”

We should point out here that the word “liberal” meant something quite different in the 1770s than it does now. At that time, they were speaking of classic liberalism, a political ideology that values the freedom of individuals—including the freedom of religion, speech, press, assembly, and markets—as well as limited government. This definition drew on the economic writings of Adam Smith and the growing idea of social progress.

Photo: Detail from a painting of the First Continental Congress. Credit: Architect of the Capitol.

“This editorial project is not against the Trump administration’s agenda,” she told NPR. “It’s a response to put us into the public discourse and defend the First Amendment…there’s some strength in numbers of just defending a constitutionally enshrined pillar of democracy.”

The Globe’s own editorial read:

“A central pillar of President Trump’s politics is a sustained assault on the free press…The greatness of America is dependent on the role of a free press to speak the truth to the powerful. To label the press ‘the enemy of the people’ is as un-American as it is dangerous to the civic compact we have shared for more than two centuries.”

Each of the newspapers ran an editorial—typically written by opinion writers and considered separate from organizations’ news coverage—defending freedom of the press.

The New York Times wrote an editorial called “A Free Press Needs You,” stating, among other things:

“Criticizing the news media—for underplaying or overplaying stories, for getting something wrong—is entirely right. News reporters and editors are human, and make mistakes. Correcting them is core to our job. But insisting that truths you don’t like are ‘fake news’ is dangerous to the lifeblood of democracy. And calling journalists the ‘enemy of the people’ is dangerous, period.”

The Times’ fears of danger toward reporters definitely have some merit. MSNBC’s Katy Tur said someone wrote to her, “I hope you get raped and killed,” and that other female journalists had gotten similar messages. She added that the message she received also ended with “MAGA,” short for the president’s famous slogan, “Make America Great Again.”

On July 31, CNN’s Jim Acosta tweeted a video that he said came from a Trump rally and featured Trump supporters giving “the finger” to the camera. “Just a sample of the sad scene we faced at the Trump rally in Tampa,” Acosta tweeted. “I’m very worried that the hostility whipped up by Trump and some in conservative media will result in somebody getting hurt. We should not treat our fellow Americans this way. The press is not the enemy.”

On August 15, the Republican-controlled Senate unanimously adopted a non-binding resolution that affirmed the “vital and indispensable role” the news media plays and stating that “the press is not the enemy of the people.” And back in January, Republican Senator Jeff Flake said that the president had “embraced the despotic language of former Soviet dictator Josef Stalin.”

Of course, the editorial crusade didn’t quite go as planned. Some conservative editorial boards got in on the action, too. Take this quote from the Slidell (Louisiana) Independent:

“The national media still doesn’t know what to do with President Trump, so now they are crying to the American people about the names they have been called. Maybe if they focused on doing their jobs instead of worrying about their precious reputation the American people might start getting real, honest journalism again.”

Some news outlets criticized the coordinated editorial effort. A CBS News commentary read that the effort was “a self-defeating act of journalistic groupthink…Seriously—Who’s going to be persuaded by this effort, or be impressed that a few hundred newspapers can hum the same tune? Who’s even going to notice?”

Politico’s Jack Shafer wrote about his own concerns that the coordinated editorial response would backfire. He wrote:

“It will provide Trump with circumstantial evidence of a national press cabal that has been convened solely to oppose him. Trump will reap enough fresh material to whale on the media for at least a month.”

What do you think? Was it a good idea for newspapers all across the country to run editorials criticizing President Trump’s attitudes toward the press, or do you, like Jack Shafer, believe that it’s going to backfire and give the president more ammunition for his claims that the press is against him? Share your thoughts in the comments!