The New NAFTA: Will It Include Canada? 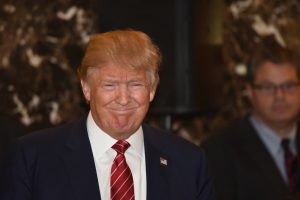 Ever since the campaign trail, President Trump has been railing against the North American Free Trade Agreement (NAFTA), a trilateral business pact between the U.S., Canada, and Mexico. He’s called it the worst trade deal in history and said the term “NAFTA” has a “bad connotation” for the United States.

The president recently started working on reframing NAFTA in a way that he says will be fairer to American businesses than the previous deal. But the tentative deal he’s worked out so far only involves Mexico.

“They used to call it NAFTA,” President Trump said. “We’re going to call it the United States-Mexico Trade Agreement.” Canada’s inclusion in the agreement is yet to be determined.

Civics Lesson: What Is NAFTA? 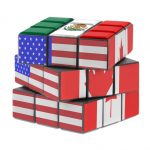 The goal of NAFTA was to eliminate barriers to investment and trade between the U.S., Canada, and Mexico. When implemented, it immediately eliminated tariffs on more than half of Mexico’s exports to the U.S., and more than one-third of U.S. exports to Mexico. By 2004, all U.S.-Mexico tariffs were to be eliminated except for some agricultural exports to Mexico—and those tariffs would be phased out within 15 years. (Most U.S.-Canada trade was already duty-free.) NAFTA’s other overarching goals were to protect the intellectual property rights on traded products and eliminate non-tariff trade barriers.

Although the president has given the agreement a new name, it’s essentially the same NAFTA, which currently allows American companies to operate in Canada and Mexico without tariffs. That part of the agreement will remain intact if President Trump has his way. But new elements of the agreement with Mexico include “significant alterations to rules governing automobile manufacturing” in an attempt to bring more car production back to the U.S., as well as updated guidelines surrounding the digital economy, agriculture, and labor unions.

However, even though President Trump’s renegotiation of a potential NAFTA may be good for businesses, neither those businesses nor members of the legislature are particularly thrilled—especially if the agreement doesn’t include Canada.

“Because of the massive amount of movement of goods between the three countries and the integration of operations which make manufacturing in our country more competitive, it is imperative that a trilateral agreement be inked,” Jay Timmons, president and chief executive of the National Association of Manufacturers said in a statement.

“NAFTA is a trilateral agreement,” said Republican Senator Patrick J. Toomey of Pennsylvania. “It requires legislation, and a change to NAFTA requires legislation. I’ve told them any change has to go through Congress. There is not necessarily complete agreement about that.”

Matthew Shay, chief executive of the National Retail Federation, said, “The administration must bring Canada, an essential trading partner, back to the bargaining table and deliver a trilateral deal.”

Mexican President Enrique Peña Nieto also originally said he wanted Canada to be part of the agreement. “It is our wish, Mr. President, that now Canada will also be able to be incorporated in all this.” But later, Mexico’s foreign minister walked back Nieto’s statement, saying that Mexico may be willing to participate in a bilateral deal with the U.S. because the Mexican economy depends so strongly on NAFTA. “Literally millions of jobs in Mexico depend on access to the U.S. market,” said Mexican Foreign Minister Luis Videgaray Caso.

But the president doesn’t seem to have been moved by any of these expressions of desire for a trilateral agreement. “Ideally we’ll have the Canadians involved,” U.S. Trade Representative Robert Lighthizer said, adding that the administration plans to officially inform Congress of its intent to sign a new agreement. “If we don’t have Canada involved, we will notify that we have a bilateral agreement that Canada is welcome to join.”

Other parts of the agreement with Mexico include an agreement over a “sunset clause,” which means it will automatically expire at some point unless Canada, the U.S., and Mexico all agree to extend it. The agreement with Mexico also includes a review of the trade pact every six years. This would give the House and Senate more time to review the agreement’s progress and give businesses the certainty they crave, at least for the short term.

As for the agreement itself, President Trump hailed it as “a big day” for America and said that “many people” had thought nobody could make a deal with Mexico.

As for Mexican President Nieto, he offered a comment that was taken by some as praise for President Trump but seems more like “damning him with faint praise” to us. “I recognize your political will and your participation in this,” he said.

Will there be a NAFTA without Canada? The odds are that the Canadian government will hold firm on ensuring that any future agreement is good for Canada and its middle class as well.