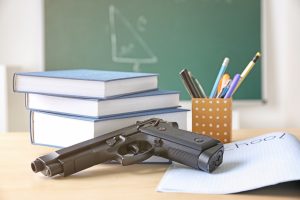 In an effort to combat the growing number of school shootings, the Department of Education is considering using taxpayer money to provide teachers with guns. As it currently stands, Congress does not allow federal school safety funds to be spent on weapons. However, Student Support and Academic Enrichment grants may provide the Department of Education with the legal loophole they’ve been looking for. As the BBC explains:

“These grants do not contain language barring the use of funds to buy weapons, allowing Education Secretary Betsy DeVos to approve or deny any state spending plans to use funding for weapons or firearm training.” 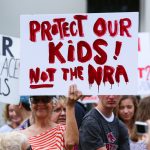 On March 14, 2018, the U.S. House of Representatives passed the STOP School Violence Act of 2018, a $50 million bill that is designed to implement stricter school security measures. The bill does not, however, do anything to tighten gun control laws.

Naturally, this proposed plan has sparked a lot of controversy. Connecticut Senator Chris Murphy is one of many Democratic lawmakers who are adamantly opposed to the measure.

“As you walk your kid to school today, think about what you will do between now and Election Day to vote out every single Congressperson who supports this insane idea,” Murphy tweeted. “Whether she [Betsy DeVos] gets away with this is in our hands. November is coming.”

Fred Guttenberg, whose daughter was killed in the Parkland school shooting, called the proposed policy a “terrible idea.”

“Trump administration is trying to destroy public safety from within,” Guttenberg tweeted. “First, allowing era of undetectable weapons and now arguing to use OUR tax dollars to arm teachers. THIS IS A TERRIBLE IDEA!!! This would not have saved my daughter, would have lead to more dead children.”