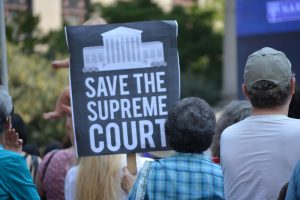 Exposed and vulnerable, she’s now being bullied into recounting a traumatic moment in her life. If she doesn’t, Kavanaugh supporters will use her silence as a means to discredit her allegations.

Ford has already come under fire for waiting 36 years to come forward about the incident. In an early morning tweet on Friday, President Trump said that, “If the attack on Dr. Ford was as bad as she says, charges would have been immediately filed with local Law Enforcement Authorities.” But as Northwestern University law professor Deborah Tuerkheimer points out, there are valid reasons why a sexual assault survivor may be apprehensive to report the abuse. 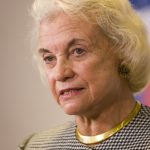 A total of 113 Supreme Court justices have served on the bench since the Supreme Court first convened in 1790. Of those 113, only four have been women.

Throughout our history, the harm of sexual violence, particularly when inflicted by an acquaintance, has been trivialized or ignored. To this day, sexual assault survivors are unlikely to see justice prevail. Their accusations are often reflexively disregarded by law enforcement officers who short-circuit the investigation before exhausting opportunities to gather available corroborative evidence.

Faced with these grim realities, sexual assault survivors tend to give up altogether on the promise of criminal justice.

If Ford were to testify, she would be relentlessly interrogated, scrutinized, and picked apart by some of our nation’s most powerful figures. That’s a lot to ask of anyone, and it shouldn’t be taken as a sign of dishonesty if she chooses not to subject herself to that.