Most Americans know that the U.S. is in massive debt. However, not a whole lot are aware of just how dire the situation truly is. According to The New York Times, America’s interest payments could exceed the Defense Department’s budget within the next five years.

“Interest costs already dwarf spending on many popular programs,” writes New York Times reporter Nelson D. Schwartz. “For example, grants to students from low-income families for college total roughly $30 billion—about one-tenth of what the government will pay in interest this year. Interest payments will overtake Medicaid in 2020 and the Department of Defense budget in 2023.”

According to the U.S. Congressional Budget Office, national interest is projected to cost $390 billion next year, a near 50 percent increase over last year. Within ten years, that figure could realistically reach $900 billion—easily surpassing the cost of many government programs.

Civics Lesson: Who Owns the Majority of US Debt? 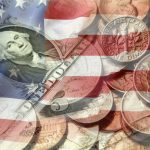 “It’s very much something to worry about,” warned C. Eugene Steuerle, an Urban Institute fellow and co-founder of the Urban-Brookings Tax Policy Center. “Everything else is getting squeezed.”

“By 2020, we will spend more on interest than we do on kids, including education, food stamps, and aid to families,” said Marc Goldwein, senior policy director at the Committee for a Responsible Federal Budget.