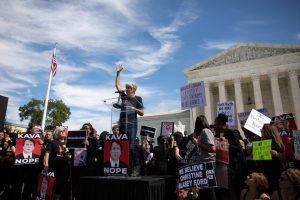 President Trump is no stranger to conspiracy theories. His latest conjecture is that wealthy liberal donors hired people to picket Brett Kavanaugh’s Supreme Court confirmation hearings. The president further speculated that donors decided to withhold payments due to how “obvious” the political ploy was.

“The paid D.C. protesters are now ready to REALLY protest because they haven’t gotten their checks – in other words, they weren’t paid! Screamers in Congress, and outside, were far too obvious – less professional than anticipated by those paying (or not paying) the bills!” Trump tweeted.

As Politico reports, the president has yet to provide any evidence to support his assertion. In a previous statement, the president went as far as to call activists—many of whom claimed to be sexual assault survivors—“rude elevator screamers.” 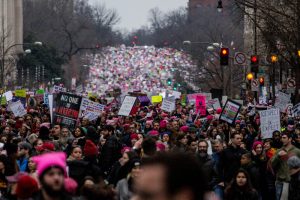 On January 21, 2017, the day after Donald Trump’s inauguration, approximately 500,000 gathered in the streets of Washington, D.C. to protest the new president. This movement, known as the Women’s March on Washington, remains the largest single-day domestic protest in U.S. history. According to Business Insider, an additional 4.2 million participated in sister marches held across the country. Other countries also took part—including Antarctica.

“The very rude elevator screamers are paid professionals only looking to make Senators look bad. Don’t fall for it! Also, look at all of the professionally made identical signs. Paid for by Soros and others. These are not signs made in the basement from love! #Troublemakers,” the president tweeted.

Ana Maria Archila, one of the activists who cornered Sen. Jeff Flake (R-AZ) in an elevator, vehemently denied that she was paid to do so. Archila, who is the co-executive director of the liberal advocacy group Center for Popular Democracy, said that the president is merely trying to discredit sexual assault survivors.

“No one can pay for someone’s lived experiences,” Archila stated. “The pain, the trauma, and the rage that I expressed when I spoke with Senator Jeff Flake in an elevator were my own, and I held it for more than 30 years to protect the people I love from it.”