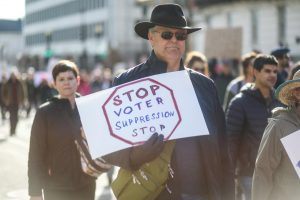 Approximately 107,000 people have been purged from Georgia’s voter rolls for not voting in previous elections, according to APM Reports.

The purge is legal under the state’s “use it or lose it” law, which allows people to be removed from the voter rolls if they haven’t voted, responded to a notice, or contacted election officials within a three-year period.

“Such laws, generally enacted by GOP governments, have been growing more common, with at least nine states now having them,” writes journalist Morgan Gstalter.

According to Let America Vote, Georgia Republican Secretary of State Brian Kemp oversaw purges that removed an estimated 1.3 million voters from the rolls between 2013 and 2017. That’s about 18 percent of the state’s eligible voting population.

Civics Lesson: History of African-American Governors in the U.S. 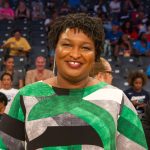 Democrat Stacey Abrams, who is running for Georgia governor, has called on Kemp to step down amid the uproar.

“As he has done for years, Brian Kemp is maliciously wielding the power of his office to suppress the vote for political gain and silence the voices of thousands of eligible voters—the majority of them people of color,” said Abrams spokeswoman Abigail Collazo.

Collazo urged Kemp to resign “so that Georgia voters can have confidence that their Secretary of State competently and impartially oversee this election.” It’s unlikely that Kemp will do so, though, given that he has vigorously defended the practice.

“While outside agitators disparage this office and falsely attack us, we have kept our head down and remained focused on ensuring secure, accessible, and fair elections for all voters,” said Kemp. “The fact is that it has never been easier to register to vote and get engaged in the electoral process in Georgia, and we are incredibly proud to report this new record.”