On Monday, a bomb was delivered to the home of philanthropic billionaire George Soros, who frequently supports progressive causes. On Wednesday, similar devices were mailed to the Obamas, the Clintons, and CNN’s New York office. Now, George Soros’ son is speaking out about what he views as a threat against “the future of American democracy.”

“We are all grateful that no one was injured, and grateful to those who kept us safe,” Alexander Soros wrote in a New York Times op-ed. “But the incident was profoundly disturbing — as a threat not just to the safety of our family, neighbors, colleagues and friends, but also to the future of American democracy.”

Soros explained that his family is no stranger to hostility. His father grew up in Hungary during the Nazi regime. His grandfather obtained false identification records so that they could survive the genocide against Budapest’s Jews (he helped others do the same). After the war ended and the Communists took control, his father fled to London, where he studied economics and began his successful career. 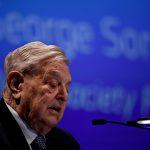 George Soros established the Open Society Foundations in 1979 in an effort to promote diverse, tolerant societies. It seeks to “strengthen the rule of law; respect for human rights, minorities, and a diversity of opinions; democratically elected government; and a civil society that helps keep government power in check.” Working in every part of the world, the organization “places a high priority on protecting and improving the lives of people in marginalized communities.”

Although his father was always under threat due to his sociopolitical views, Soros maintains that “things got worse” under the Trump campaign. He said the campaign and subsequent election were like “a genie was let out of the bottle,” in regards to how much hatred was unleashed into the world.

“We must find our way to a new political discourse that shuns the demonization of all political opponents,” Soros asserted. “A first step would be to cast our ballots to reject those politicians cynically responsible for undermining the institutions of our democracy. And we must do it now, before it is too late.”