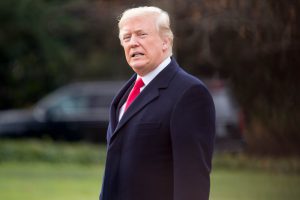 President Trump’s use of unsecured iPhones has made it easy for foreign spies to eavesdrop on his conversations, American intelligence officials say.

According to The New York Times, Russian and Chinese agents are gaining valuable insights from the president’s private conversations, including how to best persuade him. Former CIA agent John Sipher said that the Chinese and the Russians “would look for any little thing—how easily was he talked out of something, what was the argument that was used.” What’s more is that the president’s aides have repeatedly cautioned him that his iPhones are not secure, but he has continued to use them anyway. 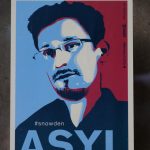 Edward Snowden is an American whistleblower. In 2013, he leaked classified documents from the National Security Agency. These documents contained proof that the U.S. government had tapped German Chancellor Angela Merkel’s phone line.

Photo: A poster demanding that Edward Snowden be be granted asylum in Germany. Attribution: 360b / Shutterstock

“The so-called experts on Trump over at the New York Times wrote a long and boring article on my cellphone usage that is so incorrect I do not have time here to correct it,” Trump tweeted. “I only use Government Phones, and have only one seldom used government cell phone. Story is soooo wrong!”

The article is based on information provided by current and former U.S. intelligence officials, who say the Chinese have already pieced together a list of whom the president frequently calls. Included in the list is Blackstone CEO Stephen Schwarzman and Las Vegas casino magnate Steve Wynn—both of which have foreign ties.

Critics say that the president’s use of unsecured phones makes him a hypocrite, given how much he criticized former Secretary of State Hillary Clinton for her use of a private email server. The president has yet to address that point.