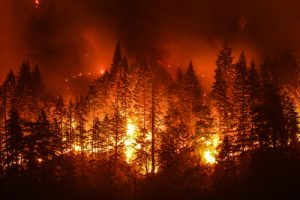 Climate change has come back to the forefront in recent years because of terrible and catastrophic weather events afflicting the US. (photo: Shutterstock)

Just when you thought America couldn’t be more divided, a new CNN poll rates climate change as the most important issue of the 2020 presidential election among registered Democrats or Democratic-leaning independents.

But for Republican voters, climate consistently ranks one of the bottom two issues.

I saw this divide recently expressed on a friend’s Facebook page in a thread about the new documentary featuring AOC called “Knock Down The House,” A commenter wrote: 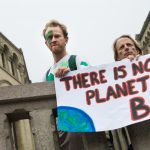 The “social cost of carbon” (SCC) refers to the rough estimate by economists of the total damages, economic, environmental, and otherwise, imposed by a ton of carbon emissions. Washington State’s new clean energy bill requires that utilities begin taking the SCC into account in all their decisions.

Specifically, the bill requires utilities to adopt the federal government’s current SCC, as established in Executive Order 12866 — roughly $68 per ton, rising to $116 per ton by 2050 — at a discount rate of 2.5 percent.

The SCC is a technical number, but the exact level is less important than the net effect of this change, which is to define carbon reduction as in the public interest and a core part of the regulatory compact. Washington utilities will be required by law to take carbon into account.

So how do you promote rational solutions that tackle the enormous scale of climate change, when a significant block of voters doesn’t see anthropogenic climate change as settled science? Not only that, but when they see any attempts by government to solve the problem as authoritarian socialism that will violently impose its solutions on non-believers who insist on eating large quantities of red meat and burning as much coal as possible?

In the 2016 presidential debates, climate action was barely mentioned and had fallen out of the national discourse with polls showing it had only recently passed 50% support after falling to lows of support in 2013. Then, a poll last year showed that climate change was back to its 2008 levels in terms of its importance to voters. 60% percent of likely voters said that global warming is taking place and that human activity is either primarily or partially why temperatures are rising.

Back in 2008, there was a “kumbaya” moment in terms of a peak of concern about climate change and it was the last time a bipartisan consensus had emerged with 58% of voters in favor of action. Nancy Pelosi even collaborated with Newt Gingrich in an ad that year to advocate for climate action.

One of the main reasons that climate change has come back to the forefront in recent years is because of the terrible and catastrophic weather events afflicting the US and the rest of the world. This summer’s floods in the midwest are only the most recent example.

Many Democratic hopefuls have seized on the topic to get an edge in the saturated primary race. Former Texas Rep. Beto O’Rourke (D), who ran unsuccessfully for the Senate against Sen. Ted Cruz (R ) in 2018, introduced a $5 trillion proposal recently to fight climate change if elected.

Jay Inslee, Governor of Washington State who is running for president, has made climate change the main focus of his campaign, while highlighting his accomplishments in clean energy as governor.

The new bill recently passed by the Washington State legislature is unique in its comprehensive and aggressive approach to achieving 100% clean energy in the state by 2045. For example, the bill includes measures that regulate for the social cost of carbon and it offers economic assistance for clean energy to low-income citizens. The bill also includes a step-down approach to carbon regulation that gets more stringent over time, and it addresses a way to get construction unions on board with its incentives and proposals.

Given all of these sensible and mainstream ways that most Democrats talk about solving climate change, how is it that many conservatives have come to believe that solutions like AOC’s “Green New Deal” will lead to true believers and radical monsters committing atrocities against non-believers or capitalists who prefer to perpetuate the status quo?

For many Americans who do not believe the climate science, they see Democrats’ calls for government backed solutions as nothing more than a ploy, a Trojan Horse, and an excuse to impose Big Government socialism on freedom-loving libertarians many of whom happen to think of themselves as “real Americans.”

You can trace a lot of this divide to anti-climate science pushed by the Koch Brothers and other power players in the oil and gas industry. They backed a few scientists to publish reports skeptical of the prevailing science and they pushed those reports via the right-wing propaganda machine. When you combine that doubt with 70-years of “Red Scare” propaganda that portrays moderate, mainstream programs like the FDR’s New Deal as examples of radical socialism, you get the toxic rhetoric and fake-news memes like we see everywhere on social media today.

Understanding the stark difference between the right-wing propaganda compared to the real-world, moderate, public/private hybrid solutions being promoted by Democrats and conservatives alike, is an important step.

You can confidently reply to climate deniers that authoritarian socialism isn’t needed to take bold climate action.  Activists must band together to document and promote a sensible mix of government policies and private initiatives that are helping to reduce and remove carbon from the atmosphere.

As we perfect and optimize our messaging, we must also build an online network infrastructure and digital persuasion engine that can respond to the lies and propaganda pushed by the oil & gas industry, while also promoting a coherent and compelling science-based narrative that shows the beauty and promise of a green economy.

We must become masters of both message and medium if we expect to implement the massive changes in policy and technology needed to reach our massive near-term carbon reduction goals.