The Second Amendment Needs an Update 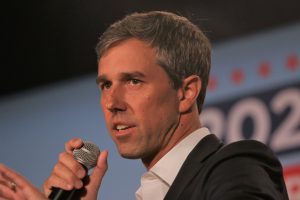 One of the most popular political memes on the internet is based on a quote and an article from the early 1990s by former Supreme Court Chief Justice Warren Earl Burger, and it reads:

“The Gun Lobby’s interpretation of the Second Amendment is one of the greatest pieces of fraud, I repeat the word fraud, on the American People by special interest groups that I have ever seen in my lifetime.

The real purpose of the Second Amendment was to ensure that state armies – the militia – would be maintained for the defense of the state.

The very language of the Second Amendment refutes any argument that it was intended to guarantee every citizen an unfettered right to any kind of weapon he or she desires.”

We may never have sane gun laws in the country unless this fraud is exposed to most American voters.

The crime to which Burger is referring is the fact that the NRA, starting in the 1970s, began a disinformation campaign that split the second clause of the Second Amendment from the first. Up until that point in time, every Supreme Court case and every piece of Congressional legislation assumed the right to bear arms was in the context of the need to maintain a well-regulated militia.

As Justice Burger wrote in his 1990 op-ed, in the 1789 debate in Congress on James Madison’s proposed Bill of Rights, Elbridge Gerry argued that a state militia was necessary:

“to prevent the establishment of a standing army, the bane of liberty … Whenever governments mean to invade the rights and liberties of the people, they always attempt to destroy the militia in order to raise an army upon their ruins.”

Burger wrote that, “We see that the need for a state militia was the predicate of the “right” guaranteed; in short, it was declared “necessary” in order to have a state military force to protect the security of the state.”

Former Supreme Court Justice John Paul Stevens wrote that the Second Amendment was obsolete and should be repealed because a standing army was now a requirement for US national security and not the grave threat to tyranny it was in the 18th century:

“Concern that a national standing army might pose a threat to the security of the separate states led to the adoption of that amendment, which provides that “a well regulated militia, being necessary to the security of a free state, the right of the people to keep and bear arms, shall not be infringed.” Today that concern is a relic of the 18th century.”

In The Federalist Papers 28 and 29, Alexander Hamilton wrote about the threat of standing armies and the importance of state-run militias as a way to protect Americans from a Federal standing army that could be controlled by a tyrant. James Madison gave a similar warning in Federalist paper 46.

The Bill of Rights was a list of the most important natural rights that the Founders felt needed to be explicitly encoded so that they would specifically be protected from a tyrant who might someday take control of the Federal government. 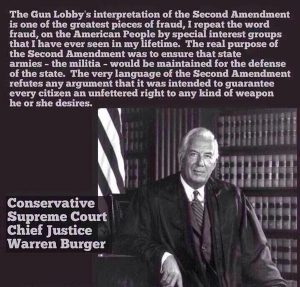 The Second and Tenth are unique among the amendments in the Bill of Rights in that they are the only amendments not protecting an individual right, but a state’s right. The Second Amendment was protecting the right of each state to form a militia and ensuring that the arms that men could “keep and bear” for that purpose could never be taken away.

Cannons and heavy weapons were always kept at the local armory under the protection of the state, and individuals were never assumed to have a right to keep any arms that were larger than what they could carry. The Second Amendment has always been about small arms no larger than what a person could carry and bring to their militia service. Supreme Court Justice Antonin Scalia explained this in an interview a few years before he passed away.

Scalia also agreed with the last part of Burger’s quote about the Second Amendment not allowing anyone an “unfettered right to any kind of weapon he or she desires.” The Supreme Court’s 2008 Heller decision was the first time in US history that the right to bear arms was officially separated from the responsibility to use those arms in a militia, but in his majority decision Scalia wrote:

“[L]ike most rights, the right secured by the Second Amendment is not unlimited.” It is “not a right to keep and carry any weapon whatsoever in any manner whatsoever and for whatever purpose.” And: “Nothing in our opinion should be taken to cast doubt on longstanding prohibitions on the possession of firearms by felons and the mentally ill, or laws forbidding the carrying of firearms in sensitive places such as schools and government buildings, or laws imposing conditions and qualifications on the commercial sale of arms.”

Until World War II, a large standing army had never been maintained in the US, and the nation relied heavily on its state-run militias aka National Guard units. The Militia Act of 1903 officially made the National Guard the inheritor of the “organized militia” and the “unorganized militia” was deemed to be any able-bodied, U.S. male citizen between the ages of 17 and 45.

Article 1, Section 8 of the Constitution lists the powers of Congress, which include:

“To provide for calling forth the Militia to execute the Laws of the Union, suppress Insurrections and repel Invasions;”

It did not state the main role of the militia was to overthrow the government. As noted above, a state-run militia under the command of that state’s legislature and governor was the intended vehicle to protect a population from a tyrant commanding an army against its people and Article 1, Section 8’s Clause 16 in the list of Congressional powers specifies:

“To provide for organizing, arming, and disciplining, the Militia, and for governing such Part of them as may be employed in the Service of the United States, reserving to the States respectively, the Appointment of the Officers, and the Authority of training the Militia according to the discipline prescribed by Congress.”

So the militia had a dual role, to report both to a governor of state and to become available when requested by Congress. Our National Guard units today have that same dual reporting structure.

Paramilitary dudes in camouflage, running around in the woods of Idaho and Michigan are not what the Founders had in mind with the Second Amendment. Those guys are more like the rebels in Shay’s Rebellion or the Whiskey Rebellion that state militias were formed to suppress. If you want to fight tyranny with your guns, join the National Guard.

President Trump has threatened to start a civil war if he’s impeached or voted out:

Should this happen, I believe it is in the spirit of the Second Amendment for each state’s governor to then command their state’s national guard to resist and fight back against any forces that remain loyal to the president.

One question Heller leaves open is whether or not the AR-15 and similar weapons can legally be banned or confiscated, as Democratic presidential candidate Beto O’Rourke has recently advocated. That will likely come down to what “and the like” means in this part of Heller — the Heller opinion cited “the historical tradition of prohibiting the carrying of ‘dangerous and unusual weapons,’ such as “weapons that are most useful in military service — M–16 rifles and the like.” Heller also established that guns legal for personal use must only include firearms that are in “common use,” such as the handguns that were the focus of that case.

It is very likely that a disagreement about the AR-15 and assault-style weapons will wind up in front of the Supreme Court, which will have to decide if those firearms are more like an M–16 and useful mainly for military service, or if they are in common use. Current estimates show that AR-15s represent two to four percent, or between 8 and 16 million out of the nearly 400 million guns held privately by Americans. Is that common?

So far, the Supreme Court has refused to hear challenges to bans of AR-15s, letting state laws like those in Connecticut stand. If a Democratic president did try to implement a non-voluntary buyback of AR-15s, that could only happen if Congress passed such legislation. If 2020 becomes a wave election that hands the Democrats the Senate, such a ban and confiscation could very well become law.

Regardless of those outcomes, Americans would be wise to push for a new Constitutional amendment to update the now obsolete, Second Amendment. We need a new amendment that removes the outdated part about militia service, while maintaining protections against tyrants like Trump, and that allows some firearms for personal use. Perhaps it should read something like this:

“Nuclear weapons and other weapons of mass destruction have made it imperative for the United States to maintain a large standing military.

In the event a president should command US military forces or any US citizens to use arms against their fellow citizens, the governor of each free state has the right to command its National Guard to defend the security of its people.

The right of the people to keep and bear arms for personal uses like self-defense and hunting shall be maintained, consistent with all state and federal laws and regulations.”

What do you think? Were the clarifications in Heller sufficient to keep the Second Amendment as-is? Would you take the government’s money and hand over your AR-15, or would you rather defy the law and fight the state’s police and National Guard commanded by the governor of your state?