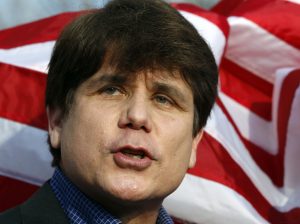 Former Illinois Governor Rod Blagojevich makes a statement to reporters outside his Chicago home one day before reporting to federal prison in Colorado to serve a 14-year sentence for corruption, March 14, 2012. REUTERS/Jeff Haynes/File Photo

Since President Trump’s impeachment acquittal in the Senate a few weeks ago, he’s become quite fond of putting his thumb on the scales of justice.

First, President Trump Tweeted a request for leniency for his former campaign advisor and long-time friend, Roger Stone. Then, the president’s attorney general, Bill Barr, appointed a special attorney to examine the prosecution of Michael Flynn, Trump’s former National Security Advisor who was convicted of making false statements to the FBI.

Civics Lesson: The Office of the Attorney General 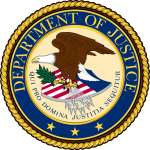 Congress passed the Judiciary Act of 1789 which, among other things, established the Office of the Attorney General. The original duties of this officer were “to prosecute and conduct all suits in the Supreme Court in which the United States shall be concerned, and to give his advice and opinion upon questions of law when required by the President of the United States, or when requested by the heads of any of the departments”. The Department of Justice was established in 1870 to support the Attorney General with law enforcement.

The original role of this new Department of Justice was to create and manage a group of federal agents who could go after, arrest and break up the burgeoning KKK groups that were springing up across the South to oppress and terrorize formerly enslaved people.

Today, President Trump announced pardons and commutations of eleven of his former friends and associates including Edward DeBartolo, a former owner of the San Francisco 49ers and Rod Blagojevich, a former Governor of Illinois and contestant on “Celebrity Apprentice.” The president also pardoned the financier Michael R. Milken, the former New York City police commissioner Bernard B. Kerik.

One of the consistent threads running through these interventions was that the defendants had all been convicted by James Comey, Robert Mueller or one of their assistants, or they were friends or former advisors of the president. Another through line is that all of the defendents let off today were convicted of corruption, which is basically what President Trump was impeached for: a corrupt abuse of power.

The president was clearly sending a signal that he feels the right to intervene in the justice system in order to target his political rivals and help his friends. Why shouldn’t he? The Senate just acquitted him for using his office to target a political rival. “Go for it,” is clearly the message he heard.

These moves by the president during the past few weeks are precisely the type of power the founders feared a tyrannical president may attempt to gather for himself. They aren’t the typical pardons issued by presidents at the end of their presidency. Instead, they are a direct assault on our founding principle of limited government. Bush and Clinton at least pretended to have principled reasons for their pardons. In contrast, the New York Times’ Maggie Haberman and Michael Shear reported that Trump didn’t follow Justice Department vetting process before making the announcements.

The Constitution separated the government into three separate branches in order to limit the amount of power held by any one branch. The main branch the powers were being separated from was a king or tyrant who typically held all of the powers of church and state within his or her reign.

In the founders’ debates about the presidential pardon power, you can see where they saw the limits of executive power necessary to maintain a healthy separation of powers and a danger in the pardon power. As George Mason argued, the president:

“ought not to have the power of pardoning, because he may frequently pardon crimes which were advised by himself.”

He went on to say there must be an exception to the pardon power for cases of treason, because what if the president was attempting to use the pardons to cover up and intervene in investigations to his own conspiracy to comfort our enemies?

As D. W. Buffa of the Brookings Institute explained:

“The possibility that the president might use the power to pardon as a means by which to protect those with whom he had conspired to do harm to the United States by “adhering to,” or giving “aid and comfort” to, its enemies, led to one of the most important, but least remembered, exchanges in debate over whether the Constitution drafted in Philadelphia should become the Constitution of the United States.”

The exchange to which Buffa is referring was between Mason and James Madison, who responded to Mason’s thoughts about the treason exemption by stating that the remedy was the power to impeach.

Madison believed that impeachment may start simply if there are “grounds to believe” that the president might “shelter,” that is to say, protect with a pardon, someone with whom he is connected “in any suspicious manner.”

This led to the final phrasing of the impeachment power in Article II of the Constitution as:

“The President … shall have Power to grant Reprieves and Pardons for Offenses against the United States, except in Cases of impeachment.”

“Humanity and good policy conspire to dictate, that the benign prerogative of pardoning should be as little as possible fettered or embarrassed. The criminal code of every country partakes so much of necessary severity, that without an easy access to exceptions in favor of unfortunate guilt, justice would wear a countenance too sanguinary and cruel.”

Given that President Trump appears to be focussing several of his pardons on those who have been convicted by Mueller as part of the Russia investigation, the president is veering very close to the scenario that Mason and Madison feared, in which a president abuses his pardon power to cover up crimes that he directed. Will the House impeach again in order to stop a run-away abuse of the presidential pardon power? According to James Madison, they should.

Until President Trump, no president had ever abused his power to destroy the separation of powers and assume all of the powers of government. Whether it was encouraging border guards to break the law, asking the military to violate Geneva Conventions, using the power of his office to extort an ally and investigate a political rival, and now using his pardon powers along with a complicit Attorney General to violate the independence of our judiciary branch — it’s harrowing to bear witness to a president attempting to fulfill the founders’ greatest fears about a tyrannical president: that he would force all of the powers of the judiciary, legislature, and the executive into one office. Hopefully, Americans will understand this peril as we vote this November.