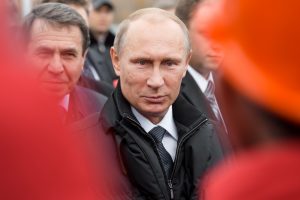 Vladimir Putin is a fascist leader who promises to return Russia to its past glory.

Q: So, can we agree there isn’t one bit of difference between Fascism and Communism?
A: No, we can’t agree on that. Fascism and Communism are both authoritarian forms of government, but all similarities stop there. The main impulse of Fascism is Nationalism. The main impulse of Communism is Marxism.
Fascist ideology is based on a core ideology of racial, ethnic, or religious supremacy. Its demagogues, like Trump and Putin, always yearn for a nostalgic return to past periods of greatness that they claim were great because they were times when a nation was pure of blood and untainted by the corrupting influence of outsiders, globalists, Marxists, immigrants, foreigners, or Jews. Stalin flipped the USSR from Communist to Fascist with his “Socialism in One Country” philosophy, which is why Putin lauds Stalin but condemns Lenin. 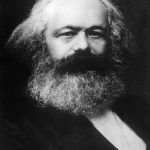 The Communist Manifesto is an 1848 pamphlet by German philosophers Karl Marx and Friedrich Engels. It was originally published in London just as the Revolutions of 1848 began to erupt. It presents an analytical approach to the class struggle, the conflicts of capitalism, and the capitalist mode of production, rather than a prediction of communism’s potential future forms. The Communist Manifesto summarises Marx and Engels’ theories concerning the nature of society and politics, namely that in their own words “[t]he history of all hitherto existing society is the history of class struggles”.

Communist ideology is based on a core ideology of the power and dignity of the worker. It is a globalist ideology that attempts to unify all workers in all nations, regardless of race, religion, or nationality, and to unite them in class struggle against the bourgeoisie. Communists seek to end private ownership of property and nationalize all industries to fulfill the motto, “From each according to his ability, to each according to his needs.”

Conservatives like to confuse the word Socialism with the word Communism and claim that they are synonymous. This has been the core logical fallacy at the root of all Red Scare propaganda. The theory gains lots of traction because the word “Socialist” is in the name of the NAZI party.

Hitler was a master of language and propaganda. Because socialism was a very popular political movement in Germany in the 1920s, Hitler included it in the name of his party, claiming that they were inventing a new type of socialism, a non-Marxist type called “National Socialism.” It should be written like this, NationalSocialism, and considered an inseparable distinct word with its own unique meaning, completely different in meaning from the words “socialism” or “democratic socialism.”
Socialism is a hybrid system that allows some private ownership of property and private markets while nationalizing a few industries like healthcare, education, and energy. Many Communists view Socialism as a necessary step on the road to Communism. Hence, the “slippery slope” logical fallacy forms one of the core memes of Red Scare propaganda.
In fact, most Socialists see socialism as an end in itself and despise Communism or any form of authoritarianism. These socialists represent the vast majority of socialists worldwide and are more accurately termed Democratic Socialists. Democratic Socialism allows for private markets, private industry, and a highly regulated capitalist economy along with the preservation of natural rights and civil rights. It serves as a delivery system for ongoing progress in human rights via public goods and services.