A Breakdown of Trump’s 2020 Election Lies 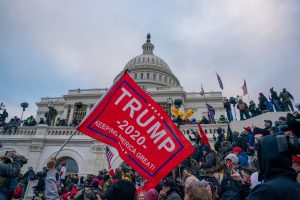 Donald Trump’s lies about the 2020 election incited the insurrection at the Capitol on 1/6/2021.

Donald Trump committed the worst act by any president in US history when he falsely attacked the results of the 2020 election. His Big Lie called “Stop the Steal” incited a violent insurrection at the Capitol on January 6, 2021, and continues to stoke threats against elected officials and our democracy.

This article lays out the main components of Trump’s Big Lie about a stolen 2020 election. It is vital that Americans understand these facts and can easily push back on lies about our elections. 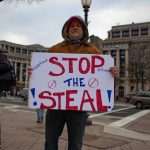 Electoral fraud, sometimes referred to as election manipulation, voter fraud or vote rigging, involves illegal interference with the process of an election, either by increasing the vote share of a favored candidate, depressing the vote share of rival candidates, or both. It differs from but often goes hand-in-hand with voter suppression. What exactly constitutes electoral fraud varies from country to country.

Electoral legislation outlaws many kinds of election fraud, but other practices violate general laws, such as those banning assault, harassment or libel. Although technically the term “electoral fraud” covers only those acts which are illegal, the term is sometimes used to describe acts which are legal, but considered morally unacceptable, outside the spirit of an election or in violation of the principles of democracy. Show elections, featuring only one candidate, are sometimes classified[as electoral fraud, although they may comply with the law and are presented more as referendums/plebiscites.

Trump’s “Stop the Steal” Big Lie is based on three main false claims:

Trump’s “Stop the Steal” Big Lie was initiated in the Spring of 2020 after it became apparent that many states would expand access to mail-in ballots in order to make it safer to vote during the Covid-19 pandemic. Trump’s first Tweet about this was on April 8, 2020:

“Republicans should fight very hard when it comes to state wide mail-in voting. Democrats are clamoring for it. Tremendous potential for voter fraud, and for whatever reason, doesn’t work out well for Republicans. @foxandfriends”

Trump continued to Tweet about it all summer, Tweeting on July 30th:

“With Universal Mail-In Voting (not Absentee Voting, which is good), 2020 will be the most INACCURATE & FRAUDULENT Election in history. It will be a great embarrassment to the USA. Delay the Election until people can properly, securely and safely vote??? — Donald J. Trump (@realDonaldTrump) “

In June 2020, the Pennsylvania State Legislature and and its unelected board of elections voted to tighten the window of accepting mail-in ballots to only three days after election day, and to require mail-in ballots to not be counted until the day of the election, a process that takes a few days of counting in the high population, Philadelphia suburbs. Republicans planned these delay tactics because they knew that Trump wanted to use the big Democratic mail-in ballot count that would come in as a basis for his lies about “mysterious ballot dumps” and they predicted that late counts of mail-in ballots would show a big surge in the vote count toward Biden.

In September of 2020, Time magazine broke down the two main false claims Trump was using for his lies about mail-in ballots:

“On television, at rallies and on Twitter, Trump has falsely claimed that mail-in ballots:

(1) “lead to massive corruption and fraud,” that

(2) foreign powers will “forge ballots” and

The false claims about “massive corruption and fraud”as well as the one about “foreign powers” forging ballots are debunked based on three main factors of all mail-in ballots:

The mail-in ballot lie about foreign powers forging ballots was so pernicious that the 2021 Cyber Ninjas audit of Maricopa County, Arizona’s results included volunteers examining ballots with UV light to look for traces of bamboo because they believed China had dumped ballots in their district. No evidence of this type of fraud was found.

“…Judges J. Harvie Wilkinson and G. Steven Agee, joined by Judge Paul V. Niemeyer, said the majority’s ruling had endorsed a pernicious trend. “It takes no special genius to know what this insidious formula is producing,” they wrote. “Our country is now plagued by a proliferation of pre-election litigation that creates confusion and turmoil and that threatens to undermine public confidence in the federal courts, state agencies and the elections themselves… This case involves an extraordinary attempt by an unelected state board of elections to rewrite the unambiguous terms of a statute enacted in June by a bipartisan state legislature to set time, place, and manner requirements for absentee voting in response to the Covid-19 pandemic,” the brief said.

In fact, the damage had been done by Trump and his allies gaming of election rules and public perception about US elections lacking integrity, when in fact most professional observers viewed the 2020 election as one of the most secure in US history.

This lie builds from the mail-in ballot lie, by confusing voters about the normal counting of large amounts of mail-in ballots on and after election day.

In the days after the election, Trump’s main arguments centered around supposed election fraud by election workers in Wisconsin, Michigan and Pennsylvania. Trump’s mysterious “dumps” of ballots claim is based on fake news reports about election workers in Atlanta, Detroit, Philadelphia, and Milwaukee (always black workers in majority black cities).

“…most of these ballot “dumps” were from heavily Democratic cities and were reported late due to delays in counting mail-in ballots—delays that happened because election officials in many states were required by law to wait until Election Day to count mail-in ballots.

For instance, Trump’s lead in Wisconsin evaporated in the early morning on November 4th—a phenomenon the president specifically mentioned in a tweet—because Milwaukee reported 170,000 absentee ballots which skewed overwhelmingly towards Biden; this burst of votes for Biden was expected because Democrats were much more likely to vote by mail, and Milwaukee is very blue.”

Starting on December 3, 2020, President Trump and his allies latched onto a new claim of election fraud, this time in Georgia, where a video had surfaced of election workers taking out ballots to resume counting after a pause in the middle of the night. Trump’s campaign and others Tweeted about “suitcases filled with ballots pulled from under a table and illegally counted after election observers were told to leave”

This was a flat out lie, easily debunked, but in the right-wing echo chamber, this lie had become a fact for Trump supporters who wanted to believe the ex-president was telling the truth.

The Georgia election worker who was seen on video restarting her vote count filed a lawsuit against the Gateway Pundit  in December 2021. She had received numerous death threats from Trump supporters and was forced to move to a new town because of Trump’s Big Lie.

These lies were immediately debunked by mainstream media and by Dominion Voting Systems, but the damage had been done with most Trump supporters believing this part of the Big Lie.

“…described a convoluted scheme under which an “algorithm” manipulated by Democrats switched votes from Trump to Biden. But she claimed it broke down because support was so strong for Trump, so Democrats were forced to use a “back door” method to manipulate the vote with mail-in ballots slipped in during the dark of night.”

Powell went on to clarify that:

“The Dominion voting systems, the Smartmatic technology software and the software that goes in other computerized coding systems here as well, not just Dominion, were created in Venezuela at the direction of [former president] Hugo Chávez.”

Powell even filed these false claims in lawsuits on Trump’s behalf, contesting the 2020 election results. Not a single judge accepted her claims, with a district court judge in Arizona saying the case was “sorely wanting of relevant or reliable evidence” and a judge in Wisconsin saying Powell’s requests for relief were beyond the court’s powers to address “absent the mythical time machine.”

Powell was ultimately sanctioned by multiple courts for bringing these frivolous and damaging lawsuits, she was sued by Dominion Voting, and had fines issued against her and Trump’s lawyer Lin Wood.

In May of 2021, the right-wing propaganda machine pushed false claims that Dominion lost its lawsuit against Powell and others. In November of 2021 these same false claims resurfaced, but the Dominion lawsuits remain unresolved.

In September 2021, internal Trump campaign memos  were released in court showing that the campaign knew in the days after the election that no credible evidence of electronic vote manipulation in the 2020 election had been discovered.

To this day, no evidence of electronic voting machine manipulation or any mass voter fraud in the 2020 election has been discovered.

Trump’s campaign continues to issue lie after lie about our elections in order to undermine faith in our democracy, paving the way for his brand of fascist authoritarianism to replace our Constitutional republic.