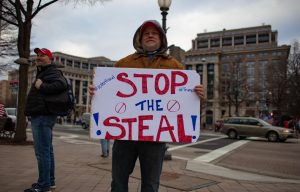 Stop the Steal Protestor in Washington, D.C. on 1/6/2021 photo: shutterstock

We recently received this comment on the Civics Nation Facebook Page about our article on Trump’s “Stop the Steal” Big Lie:

“You people wouldn’t know facts if they slapped the shit out of you. First how many people have been charged with insurrection? Pennsylvania voting unconstitutional, over 200,000 un matching signatures in Arizona, videos of ballot box stuffing in Georgia, 100 percent voting participation in Wisconsin even though a large part of them have Alzheimer’s . These are a few of the facts you ignore. And you people are still crying about the 2016 election being stolen without a shred of evidence except media lip service like this.”

Here’s my response (below Civics lesson): 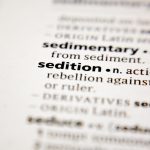 Eleven people, including the leader of the Oath Keepers, have been charged with Seditious Conspiracy aka Insurrection and one of those people has pleaded guilty. Many more sedition/insurrection charges are coming as we learned yesterday about multiple DOJ subpoenas issued to the 1/6 failed coup funders and plotters. Next round of subpoenas will go to Trump’s inner circle, then to Trump. As for Pennsylvania, the US Supreme Court rejected hearing that case, meaning they agreed with the Circuit Court ruling and rejected the Appeals court ruling, verifying that PA was Constitutional.

As for your Arizona claims, they did not find 200,000 unmatching signatures. They did an extrapolation to estimate that number based on six people looking at 500 ballots:

“In the signature verification study, three expert forensic document examiners and three novices reviewed 499 images of early voting mail ballot envelopes to determine if the signatures on them matched with the signatures on file. All the reviewers agreed that 60 of the 499 envelopes, or 12% were signature mismatches.”

Who are those people? Is that truly a randomized and representative sample of ballots? No one knows and so that number is meaningless. It was produced by a GOP hired gun from the failed Cyber Ninjas audit.

As for “Georgia ballot stuffing,” that is a fake news video you saw and it was completely debunked and exposed as a selectively edited hit piece. Please read my article in the OP for details and here’s the key link.

As for Wisconsin, you’ve been completely duped:

Hardly anyone is crying for Hillary 2016, and almost no one claimed her election was stolen or that votes were off and she conceded and accepted the results, unlike Trump. What she and others do claim is that the 2016 election was influenced in Trump’s favor by Russian cyber-ops and that those ops were illegally aided and abetted by the Trump campaign. The Mueller Report and the GOP led Senate Intelligence Committee each verified more than 100 contacts between the Trump Campaign and Putin operatives, but there was so much felony obstruction of justice committed by Trump (documented extensively in Volume II of the Mueller Report) that it was not possible to ascertain a level of coordination between Putin and the campaign needed to prove a criminal conspiracy. Here’s a good article with highlights from the Senate Committee findings.

I hope you may soon learn to find and use reliable sources of information. Our democracy and Constitutional republic depend on it.